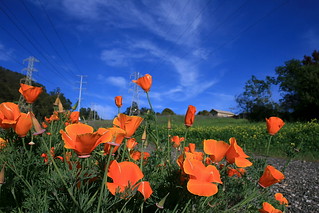 In 1930, PG&E bought out its last great rival, the Great Western Power Company. When they finished consolidating the companies in 1935, Great Western disappeared, but it lives on today as the name of this weeks trail. (It also is the name of a climbing gym in Oakland). Apparently the substation between Schmidt Lane and Portola was originally a Great Western Power facility, providing power to, among others,  its neighbor, the Hutchinson & Brown quarry at the end of Schmidt. It is a fitting name for the trail, since the open space it passes through owes its existence to the power poles and lines that follow Moeser Lane up towards Wildcat canyon and beyond. 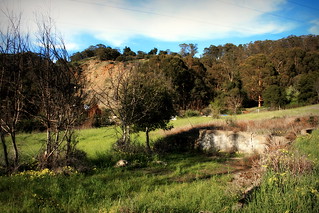 Of course it might also have been called the Portola Trail, since it is, in essence, a continuation of Portola Drive. Beginning at a chain gate just east of  Navellier, the trail is a dirt access road for PG&E repair crews, but also a well used hiking trail. As long as you are there, you might care to take a look at the foundations just north of the trailhead. These are the remains of an out-building of the H&B quarry, now gone green and inhabited by lizards. The foundations are crumbling and the surface uneven, so have a care is you take a closer look.

Returning to the trail, proceed east for about 500 feet, where the trail splits into two branches. The southern spur heads towards, and then parallels, Moeser Lane as it heads up the hill. Around the level of Seaview Dr., about 1000 feet along, it intersects a cross trail. Just east of this is the site of the annual Sundar Shadi Holidays display. This trail continues upward to Shevlin Dr.

If instead you follow the northern spur, you pass under the edge of trees that continue on into the Hillside Natural Area. About halfway up, there is a creek bed dividing the PG&E land from the HNA, and where the creek goes underground there are traces of a trail that used to connect to the Ken Smith Trail, but which now is hardly passable, very steep and quite dangerous. Continuing further east up the hill,  there is a trifurcation. You can contine up a steep slope to Shevlin, go south along the aforementioned cross trail, or take another spur that goes a short way north and east to the end of Errol Court. Right now, all three options are well disguised by very high grass, but all are passable.

The land between the two main branches of the trail is a rich grasslands, with large boulders and larger power poles. These grasslands support many small mammals, birds, reptiles and insects. The poles are a favorite perch for the red-tailed hawks that hunt on the hillside. No doubt the long grass is a welcome shelter when these raptors are on the prowl. But they are a sight to see when you explore this special trail.