Until now, the bottom of the Motorcycle Hill Trail ended at a low wall that required a bit of a hop to get to level ground.

A major step – or rather, a series of steps – towards giving El Cerrito the usable trail system it deserves is finally happening. Crews have installed the steps at the bottom of Motorcycle Hill Trail. 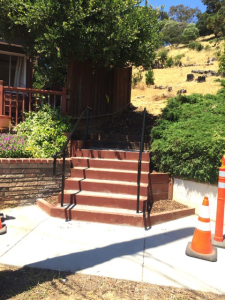 We want to thank the El Cerrito Engineers, Ana Bernardes and Yvetteh Ortiz, and the Public Works Department for planning, overseeing, and expediting the construction of these inviting steps. We also are most appreciative to Joe’s Concrete for doing the installation. In addition, Trekkers thanks Glenn Wood, an El Cerrito resident and associate principal with the firm, SGPA Architecture and Planning, for providing the initial design, pro bono. Funds from Measure WW were used for this project; many thanks to the Park and Recreation Commission and the residents of El Cerrito for this community amenity.

Our vice president Jenny Hammer was the lead on building the trail. Trail Trekkers began work on the Motorcycle Hill Trail back in 2012 after identifying the site as public property and a good access to the northern Hillside Natural Area. We began with trail survey work overseen by Harry Silcocks of East Bay Trail Dogs, (another trail building group) and Charlie Bowen and others from Berkeley Path Wanderers. Their expertise and inspiration were invaluable. In addition, many volunteers participated in the trail building project, including Tom Gehling, David Lingren, Tim Aaronson, the El Cerrito High School Mountain Biking Team, and others too numerous to name. After we determined the route based on input from our experts, volunteers removed broom and poison oak, leveled the trail, and installed treads. Trail work is not complete; we still have more treads to install and some more grading to do.

The first Trekker hike on the trail was January 2013. There have been others, since, and there will be more in the future. The trail is used on a daily basis by runners, dog walkers, Madera Elementary School students, nature lovers, explorers. We encourage all to use the trail. We also send an invitation to all who are interested to join us for future work parties.