“My life changed when I took classes in bird songs,” hike leader Tara McIntire told a hardy crew of bird watchers during her early morning bird hike at the 6th Annual Hillside Festival, and her affection for birds was infectious. 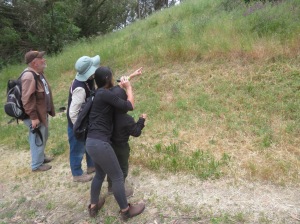 The thrill of spotting a bird or a group of birds brought people to Tara McIntire’s early morning bird walk.

Tara’s interest in birds is much more than academic She loves them. Waxwings she calls “gorgeous, gorgeous birds.”

“The cutest birds,” she says of another bird we spot, the Bewick’s wren, “and they have attitude.”

During the two-hour stroll, young and old participants, binoculars in hand, saw many birds and learned much – including about the ethics of birding. Did you know not to point at small birds you spot in nearby bushes? A Canny crow may be watching and can swoop in to make that small bird its next meal.

During the three-day festival there were many such revelations. Our hike leaders are experts in their fields. Eddie Dunbar led a large group, mostly made up of young families but with some serious entomologists too, on a jaunt that brought to the fore tiny critters that delighted and amazed. 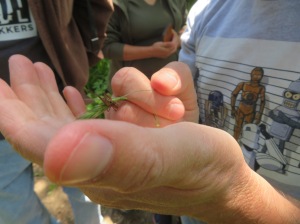 Eddie Dunbar; Insect Hike 25. Members of the tour got up close and personal with some tiny critters. None were harmed. 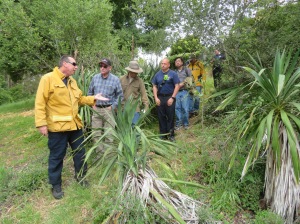 Dave Gibson, the city’s fire marshal, led a tour that took in areas that were once filled with dangerously flammable brush but are now grasslands, where fires can be more easily tamed. He focused on how the city is reducing brush in the Hillside Nature Area to prevent tragedy. Neighbors who attended had plenty to say about the matter too.

The Dog Scouts, meanwhile entertained canine friends and their owners by running dogs through scent training. 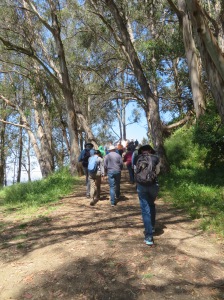 Three geologists led an enthusiastic gathering uphill and down to reveal much about the formation of the ground beneath our feet and its ever-changing life.

We had not one but three geologists and two lively and informative geology hikes that ranged from the global to the local to the seismic in their reach. 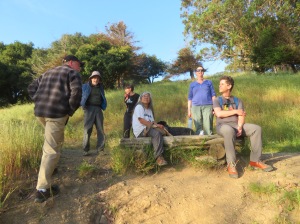 Hikers took in the views as sunset neared during the Early Evening Ramble.

Not every event had a serious or scientific purpose. Alina Constantinescu led a wonderful “evening ramble” whose purpose was to stretch your legs and get to chat with fellow hikers. 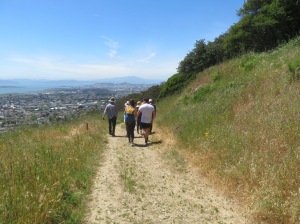 Whatever walk you were on, the views were wonderful. This is the first geology hike.

We had 15 events in all, attracted about 350 people, made new friends, and enjoyed a social gathering with a view – thanks to donations from Trader Joe’s and the El Cerrito Natural Grocery. 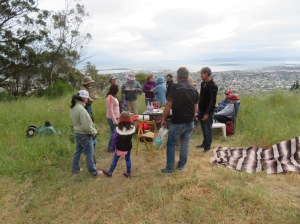 People attended from Oakland, San Francisco, Fremont, and beyond – though most attendees were from El Cerrito, Berkeley, Albany, and thereabouts. We were pleased that Mayor Rochelle Pardue-Okimoto came on our wildflower hike. 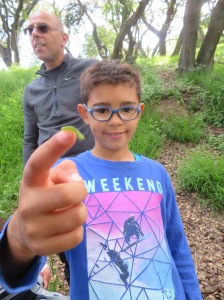 A young man enjoyed the thrill of discovery during the Young Persons’ Nature Hike, co-sponsored by Madera Elementary School.

Every member of the Trail Trekkers board worked diligently to make this event happen. Our co-sponsor, the El Cerrito Environmental Quality Committee, helped publicize, and provided funding and inspiration and some legwork too. The El Cerrito Historical Society co-sponsored our history hike. We thank city staff for their cooperation and assistance. 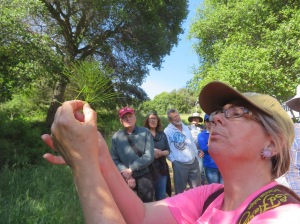 Janet Gawthrop knows native plants like few others, and her knowledge and love of the subject both informed and affected everyone present.

We also heartily thank all of our hike leaders and other event organizers, and all of the Trekker volunteers who attended each event. 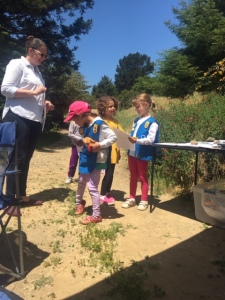 Girl Scouts enjoyed the Scavenger Hunt, where young people enjoyed hunting for plants and animals throughout the hillside, and winning prizes for finding them. 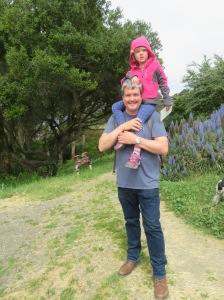 One of the festival’s geology hike was aimed at families. This dad and daughter enjoyed the geology and the trek.

Please attend next year’s festival, which we project will again be the first weekend in May.