Join friends, neighbors, open space fans, and local musicians who are donating their talents so we can buy the 8-acre Madera Open Space to add to the Hillside Natural Area.

2 to 6 p.m. Sunday, October 12
$15 donation. Refreshments for purchase, a silent auction and more!
Courtyard of the Community Center, 7007 Moeser Lane (inside if it rains).

Edie O’Hara is an emerging Bay Area musician whose original songs fall into a singer-songwriter category, somewhere between “contemporary folk” and “folk-rock.” Her debut CD, titled Truth of the Heart, was released in 2012. Her songs are mostly drawn from her own life experiences, and (in a few cases) those of people she knows. Some of the lyrics deal with complex family relationships, some with the struggle to accept and believe in yourself. Some have an aching, soul-searching quality, others are upbeat life affirmations. There are elements of fun and humor as well. Whatever the style or subject, these are affirmative, healing songs which do what is expressed in the title track; they touch “the truth of the heart.” Edie has had a lifelong connection to Folk and Americana Roots music for the way it speaks to the depth of human experience.

“Nothing overdubbed, no looping, no auto-accompaniment, no sequencing,” Stefan Lipson says of his music, performed on an electronic drum pad he helped design. “I’m playing everything live.”
Detroit-born Stefan Lipson started playing drums when he was 5 years old and began working professionally at 13. Lipson began exploring  the world of music performance software, eventually creating Sybil, the first program intended specifically for performing musicians.
Kaleido, his newest performance software, allows a performing musician to reconfigure and redefine the capabilities of any MIDI capable musical instrument with the click of a button.
“As a musician who spent many years shedding and developing my skills, I just want to play. I want to apply the skills and technique I’ve developed on my instrument to express myself and so I’m not interested in technology for technology’s sake. That’s why I love using Kaleido…because it’s not about technology, it’s about extending and redirecting the instrumental technique and ideas I have.”
http://stefanlipson.com.

Plundering the wide world and our own ghettos and back roads, Funkadelicatessen creates innovative instrumental music that appeals to fans of retro instrumentals, jam bands, funk and psychedelia looking for a taste of the exotic.
The Funkadelicatessen features Seething Brunswick members Mike “064” Freeman on guitar, Bill Sparks on sax and Zachariah Veley on Keyboards along with Darren Potter on drums and Eric Steinberg on bass.
All the members have played in many Bay Area bands, including (the real) Process, Neurohumors, the Farmers, The Get Down, and more. Freeman has recorded extensively, created several multi-media performance spectacles and performed in a variety of Bay Area rock clubs.
Freeman is also handling the sound system and set up for today’s concert!
http://www.oranjproductions.com.

Eva and her Flamenco ensemble 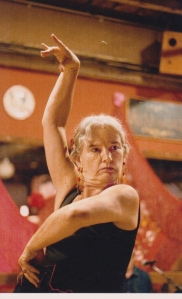 Eva (Eve Ma), a dancer, filmmaker, historian and celebrator of culture and community, splits her time between El Cerrito and Spain where she is immersed in the world of Flamenco.
Her ensemble includes some of the most accomplished masters of Flamenco in the Bay Area and is not to be missed!
http://www.palominopro.com.