Our series visiting Trails of the Week was written in 2014 and 2015 by Tom Gehling. Be aware that details change over the years. Enjoy our trails! 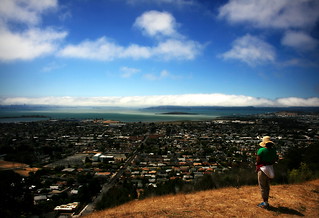 Wikipedia lists the elevation of El Cerrito as 69 feet, which is the approximate elevation at City Hall. The Plaza is a little lower, the shopping districts on Stockton and Fairmont are a little higher, but most of the business in the city probably occurs at an elevation within 50 feet either way. Not so the trails of El Cerrito. For instance, the vista pictured here, on the Ridge Trail above the Recycling Center, is almost 500 feet higher, but even this doesn’t take in the full elevational range of El Cerrito. We’ve barely risen halfway to the high point in the city, a place no trail will take us since it is on private property. And under a house.

A house on the summit [TJ Gehling]

The highest point in El Cerrito is Wilhelm Rust Summit, located at the top of Thor’s Bay Road above Arlington Park. Most people who know something of the city’s history have heard of Wilhelm Rust. He gave his name to the village that preceded El Cerrito, while selling hardware and serving as the first postmaster. So it is appropriate, if not necessarily widely known, that the highest point in the city is named for him. The summit is 1004 feet above sea level, the only place in the city that tops 1000 feet. But the best you can do without trespassing is about 960 feet, at the end of Thor’s Bay Road, and then there is nothing to do but turn around and go back. If you don’t want to climb Thor’s Bay, which is very steep but contains neither a bay nor a Norse thunder god, the view pictured here is from the entrance to T-B road at Arlington. 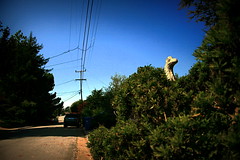 The eastern side of the crest of the hills faces Wildcat Canyon, and the Trekker trail list features two trails that head down into the canyon: the Rifle Range Road trail and the Terrace to Wildcat trail. But how to get from one to the other (without descending into the Canyon)? Surely there must be something more interesting than walking the Arlington from Terrace to Rifle Range? Well,  you can’t actually avoid Arlington completely, but there are interesting ways to cut out a lot of it. And a major component of that way is the combined Leneve Place and Ivy Court paths.

Leneve Place begins at Terrace just a short block before that street’s end at the Wildcat Canyon trail. And in actuality it is just a city street, albeit one with some interesting features. For one thing it is would be a  cul-de-sac if it weren’t for the cul-de-sac at its end, Ivy Court. Together they are a dead end, at least for cars. Another interesting feature is the presence of sauropod dinosaurs in the bushes. There are probably theropods too, but you should be used to them. 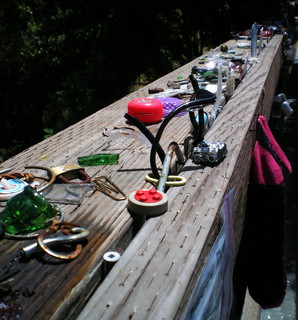 Yet another oddity for this quiet, if dinosaur infested, street is the presence of the Musee des Bibelots Voies, a collection of oddments and found art on a railing along the eastern side of the road. Unfortunately this exhibit seems to have hit hard times. When visited just a week ago the railing was almost empty and a nearby sign implied the vacant lot is for sale. The picture at right is from happier times, when a variety of trinkets could be found along the roadside. Whether that day is past we will have to wait and see.

After 1500 feet Leneve Place comes to an end with beautiful vista of Wildcat Regional Park to the east. But a short extension, west and north, continues the road as Ivy Court. Ivy Court is only about 400 feet long, but at its north end is an actual path, between 1150 and 1151. Only about 100 feet long, it is a key connector for walking in the hills.

A way along the crest in Camp Herms [TJ Gehling]

The Ivy Court path is an entry to Camp Herms, a Boy Scout facility behind Arlington Park. The camp features several trails that start on the ridge and wind down either side of a scenic canyon. The northern branch eventual comes to Thor’s Bay Road and from there to Arlington and Rifle Range. We list Camp Herms as a trail in its own right, and it will be the subject of a future Trail of the Week post, but it is necessary to mention here that the land is property of the Boy Scouts, and the right to pass through can be revoked at any time. If you use the trails be courteous, and obey any directions from the owners.