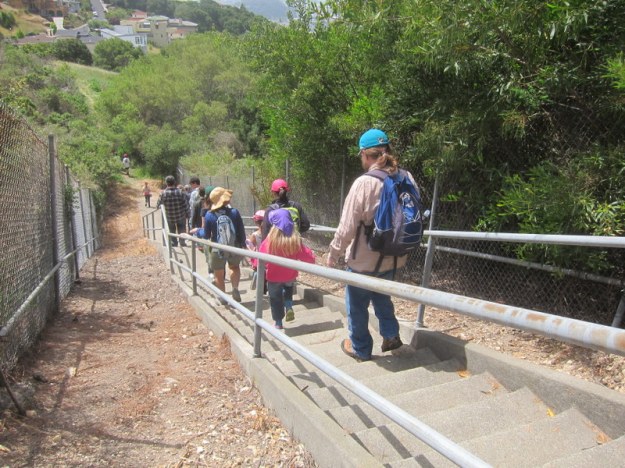 El Cerrito Trail Trekkers is a nonprofit group dedicated to preserving, improving and extending the city’s network of public pathways, stairs, trails and greenways for pedestrian and bicycle use. We also advocate for increased public open space, and sponsor activities that involve trails and open space, including hikes, festivals, and other educational events.

Brief history and accomplishments: Trekkers was founded in 2010, initially as an offshoot of the city’s Environmental Quality Committee. We were inspired by Berkeley Path Wanderers. Since then the group has built several new trails in the Hillside Natural Area, and improved several other trails.

Work parties include trail building and maintenance, broom pulling and other habitat enhancement projects, often in conjunction with the EQC Green Teams and Friends of Five Creeks.

In 2014, working with the El Cerrito High Mountain Biking Club, Trust for Public land, and the city, we spearheaded a successful effort to acquire the Madera Open Space and added it to the Hillside Natural Area. As part of the deal for federal funding, we also secured an agreement that will preserve the entire Hillside Natural Area as open space in perpetuity.

Trekkers puts on two dozen hikes every year, plus an annual Hillside Festival in conjunction with the Environmental Quality Committee.

By working closely with the city, Trekkers has brought renewed public attention to the city’s open spaces and trail network.

— We are overseeing installation of the National Park Service-designed waymarking signs in the Hillside Natural Area.

— We are working to place our Trail Maps in local stores for sale.

— We will continue to lead hikes, trail work and habitat improvement parties, and the annual Hillside Festival, as the pandemic eases or ends.

Lend a hand and add your spark of creative energy to the group. Trekkers needs hike leaders, trail and open space advocates, trail work volunteers, naturalists and anyone with enthusiasm. Email davidsweinstein@yahoo.com.

Dave Weinstein, president. One of the founders of Trail Trekkers, he is a longtime El Cerrito journalist, a member of the city’s Environmental Quality Committee, president of the El Cerrito Historical Society, and a founder of Friends of the Cerrito Theater.

Wade Huntley, vice president, is a 21-year El Cerrito resident, a one-time avid backpacker and snow mountaineer, and a committed advocate of environmental preservation. He greatly appreciates the opportunity Trail Trekkers provides to help preserve and enhance use of El Cerrito open spaces.  He is on the faculty of the National Security Affairs department at the Naval Postgraduate School in Monterey.

Pam Austin. Pam Austin is treasurer of the Trekkers and coordinates the hikes offered by the Trekkers. She is retired after about 30 years in human resources and earlier this year she became a Master Gardener.

Barbara Lass, secretary. “I am a 20 year resident of El Cerrito. I teach anthropology at City College of San Francisco, and my specialty within the field of anthropology is archaeology. I’ve been on the Trail Trekkers board (secretary) for about 2 ½ years. Wade and I enjoy hiking the trails of the Hillside Natural Area and elsewhere in El Cerrito and the East Bay.”

Clare Sheridan, member at large. Clare, her husband and teenage son enjoy walking out their front door and being on one of El Cerrito’s many trails in just a few minutes. She works as an analyst at the University of California’s Office of the President. She is grateful for all of the work that El Cerrito Trail Trekkers has done to make El Cerrito a wonderful place to live and is looking forward to continuing this work.

Melissa Hobbs, member at large, comes from five generations of women who moved back and forth between Ohio and California. The first generations on both sides came by wagon train in the 1850’s. She has been involved in the environmental movement since April 22, 1970. After earning a BA degree at Kent State University in Ohio, she migrated to California, raised a family in the wilds of western Sonoma County, and worked for the State of California as an assistant claims manager before marrying Albany and her husband Tom in 2010. She is a storyteller, writer, poet and hiker.

Trails in the news